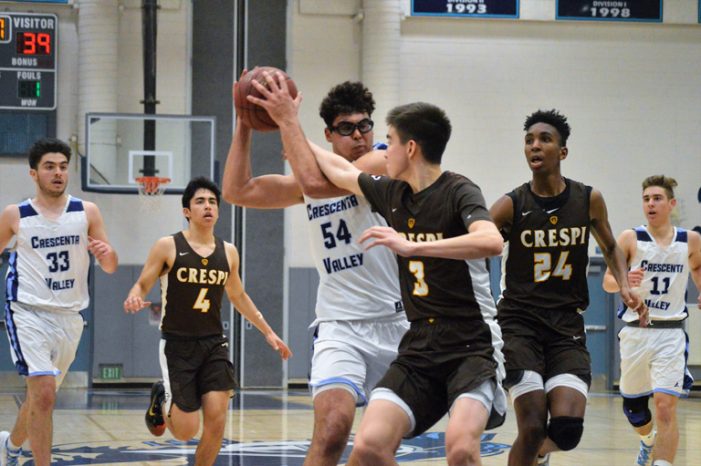 By Brandon HENSLEY
It was not a good beginning, middle or end for the Crescenta Valley High School boys’ basketball team on Feb. 12 as they were eliminated from playoff action by Crespi High in the CIF Division I first-round playoff game, 61-41.
Crespi was big and physical and CV couldn’t make shots, which led to […]

Treasures of the Valley » Mike Lawler

Recently I was sent a list of local street name origins by another local historian, Jo Anne Sadler. (For a deep dive into local name origins, get her book “Crescenta Valley Pioneers and Their Legacies.”) I’ll use her list and my own knowledge to reveal how certain streets got […]

Each year, nearly 3,600 Californians die in traffic accidents. In addition to thousands of fatalities statewide, nearly 13,000 Californians are severely injured in vehicle-related collisions. It’s a public health crisis that has been growing for more than a decade, and it deserves the same focus on research-based solutions that any other public health emergency receives.
That’s […]

LETTERS TO THE EDITOR

By Michael DUMANSKY
On Tuesday night, as smiles started to show and tears began to flow, St. Francis Golden Knights basketball captain Andre Henry bent down and kissed the court floor, then banged his chest and screamed to the heavens after the 71-53 win over Heritage Christian in the quarterfinals of the CIF Division 2-AA playoffs.
“This […]

By Julie BUTCHER
Glendale takes its local elections seriously as demonstrated by the number and variety of council candidate forums that were held across the city in advance of Election Day on Tuesday, March 3.
“But this one’s the granddaddy of them all,” Northwest Glendale Homeowners Association (NWGHA) board member Sam Engel boasted as he sorted through […]

The Church of Scientology of the Valley has been hosting NoHo Music Show – Open Mic every second Tuesday of the month since August. This month a variety of talented young and seasoned singers performed a selection of varied genres of music. Each was unique – from contemporary, rock and classical song choices – even […]

Weather in the Foothills

“This grand show is eternal. It is always sunrise somewhere; the dew is never all dried at once; a shower is forever falling; vapor is ever rising. Eternal sunrise, eternal sunset, eternal dawn and gloaming, on sea and continents and islands, each in its turn, as the round earth rolls.”
~ John Muir, Scottish-
American naturalist, […]

From the Desk of the Publisher

The End is in Sight

This has been a contentious election season with a high number of qualified candidates vying for a variety of offices. We at CV Weekly have been proud to remind you, through the advertising placed by some of the candidates and through the many articles we’ve written, of the importance of the […]

By Rachelle MILLER and Mary O’KEEFE
Although the Ace Hardware store, located at the former site of Orchard Hardware Supply at 3100 Foothill Blvd., has been open for a couple of months, a grand opening was held on Friday and Saturday with the community cheering them on.
It began on Friday with the cutting of the “board,” […]